We have repeatedly struggled with group work this year in room 10.  I matched them up, then rearranged them, then moved them to opposites sides of the room from each other, then moved them back.  Each iteration of the monthly learning partnerships and table-mates ended in frustration.  That might be an exaggeration.  Some of them did okay.  But for the most part we have been having trouble.

A few weekends ago, I sat down and did some stress detective work.  Why, I asked myself, did we continue to have difficulty?

I started by looking at the symptoms and signs of stress:

On top of this, the volume in the room would get be way beyond “rock concert” level.  I already know that sound is a stressor for some of my people, and one of the things that I saw happening was that those people would get louder…and louder…and louder.

Looking at all of these symptoms, I felt that there were some really specific social, emotional, cognitive and biological stressors at play.

So there we were.  I felt good about my list of stressors.  Now, what could I do to reduce the stress?  I decided to have some explicit lessons on how to be a good partner.  I wanted the things we talked about to fit along with the stresses being exhibited in the room.  This is what we came up with: 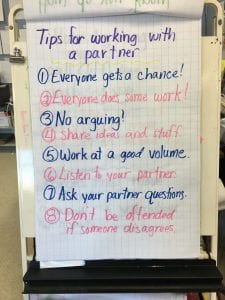 I knew I was on to something when they had a lot of trouble contributing to this anchor chart.  I had to give them the first two.  They knew everyone shouldn’t argue, and that they should get too loud.  But the other ideas on the chart seemed like new knowledge for us.  Number 8 led to some really good conversation!

Three times now, before I have sent them off to work with a partner on something, we have reviewed our list. They have done pretty well!  I feel like we need to further discuss how to disagree with someone in a way that moves the discourse further along while also not offending.  It’s tricky for some adults!  But I feel confident we can get there.

After our activities, I have reviewed the list too.  I have complimented them on their volume, and on the “no arguing”.  Now I need to go around and watch for some specific examples I can highlight.

For me this is a Self-Reg success.  I feel like my detective work has led me to recognize some lagging skills that were leading to a whole class problem.  Now we are on our way to acquiring the skills we need for success in the future!